The baby shower is one of the biggest milestones in pregnancy.  Once the 12 week and the 20 week scans were done, and I felt the baby’s kicks and watched my bump grow, I had an urge to share my excitement with my family and friends. And what better way to do this than with a spectacular party?

As the ultimate party girl, I don’t do average. It was important to me to find a venue that would wow my loved ones because this could be the last time I’ll see some of them without a baby in my hands and I wanted to spend a couple of hours catching up with everyone in style. Decadent style.

You can imagine that any place with the name Choccywoccydoodah must be special. Like me, this shop doesn’t do anything by halves. Located in the heart of London by Carnaby Street, there’s a chocolate shop downstairs, a chocolate themed café on the first floor and a secret room on the second floor, which looks like something out of Alice in Wonderland. Choccywoccydoodah isn’t just about chocolate; it captures everything that is good about chocolate such as the joy you get when you bite into a chunk and the flavour explosion that you get when it hits your tastebuds. The décor is like an explosion of fun and fabulous things – from swings to flamingos to love hearts – and that brings 100% joy.

When you book the private room for a party, Choccywoccydoodah staff lay the table for you so all you have to do is turn up and look fabulous. Before I thought about having a party here, I looked at some hotels which were bland and generic and would have taken a lot of decorating to set a baby shower atmosphere. This was ready from the moment we walked in.

The food and drink is out of this world! Did you know it was possible to have three courses of chocolate? The table was set with what would turn out to be a starter with jelly babies, marshmallows, honeycomb and strawberries to dip into bowls of melted white, milk and dark chocolate. There were also mini dark and white chocolate tiffin slices, brownie slices and chocolate straws in case anyone wanted a nibble. 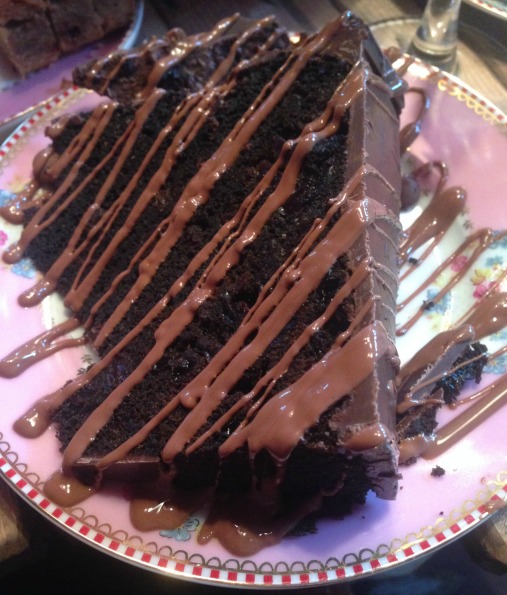 We were in the room for two hours and it passed so quickly! My sister had printed off some baby shower games but there was no time to play them because everyone was too busy eating and gossiping – my favourite things.

Choccywoccydoodah allow you to bring in your own bubbly so we brought in Liquid Gold prosecco, which comes in a variety of coloured bottles. Obviously, we had blue bottles and they complemented the table décor well and the prosecco itself tasted beautifully crisp and light – a perfect accompaniment to chocolate.

Afterwards, some of my friends went to a bar to have some more Champagne in the baby’s honour but I was so tired after the excitement that I went straight home with some lovely presents from my friends.

I also left with a massive cake, which I plan to share with my friends when they come to visit the baby at my house. It’s a boy! A very lucky boy because the first party in his honour was so fabulous.

Journalist, author and mother-of-one. I love fashion, beauty and gossip (preferably over a glass of bubbly). I founded the blog LiveLikeaVIP.com in 2009 and VIP Mums launched in April 2016 - the same month my son was born.

© 2018 Live Like A VIP. All Rights Reserved. Designed by Essence Labs.